A Garden in July

Why have I been painting gardens recently? It's a long story. It took me a long time to discover the visionary landscapes of Samuel Palmer. I had spent two very happy summers drawing the complex rock structures which make up the coastline of the Mull of Kintyre near Carradale. Unlike William McTaggart who made this landscape so well known with his vivid impressionist masterpieces like 'The Storm' in 1890 (National Galleries of Scotland) I was interested in looking at the landscape in close up. To me the splits, twists and fissures of the coastline were like a vivid reminder of a recent violent volcanic event. Towards the end of the completion of this series of paintings I saw a documentary about Graham Sutherland which focussed on his Pembrokeshire landscapes. To my surprise here was a painter who had worked with the same eye for the close up landscape as me. I was intrigued.

I later came across the work of Sutherland's close contemporaries the Neo-Romantics who included his friends Paul Nash and John Piper. What impressed me most about their work was the shared ability to convey the landscape whether real or imagined as if it were a simplified stage set lit by vivid dramatic colour. The Neo-Romantics acknowledged that they all drew much of their inspiration from the nineteenth century English painter and engraver Samuel Palmer. In particular they sited the work he produced while he lived in the Kent village of Shoreham in the 1820's as being pivotal to their new way of thinking about landscape. (The Ashmolean Museum, University of Oxford, have a superb collection of Samuel Palmer's Shoreham work.)

Although Palmer's career spanned five decades he never exhibited much of the Shoreham work during his lifetime. His small sepia drawings and watercolour of this period have a compact, mystical, dreamlike quality depicting the woods, fields, and lanes around Shoreham with a loving care which is timeless.

I have visited Great Comp Garden which is close to Shoreham on two occasions. Designed and constructed by the Scottish civil engineer Roderick Cameron who hails fae Strathaven and his wife Joy, this seven acre garden I think reflects the spirit of Palmer's response to the Kentish landscape somehow. I love its sense of space and drama. The trees so carefully placed are characters in their own right. They stand as architectural forms allowing blocks of vivid plant colour to orchestrate an ever changing array of long and short views as you walk through the garden. A sensory delight. 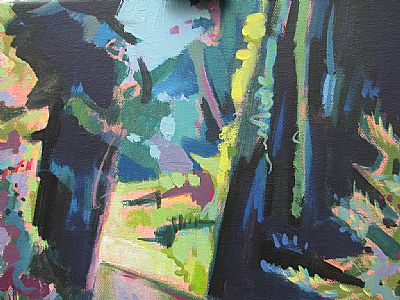 From A Garden in July series. 2014. Acrylic on canvas.