The Strange Case of St Kilda and the Search for UtopiaA Time to Keep and A Time to Cast Away'The Blue On The King's Back'A Passionate EyeLooking at Soutine: A Poke in the Eye with a Sharp BrushIndex

Seeing the Miraculous in the Everyday

At Christmas I enjoy looking at Pieter Bruegel’s Flemish snow scenes. Of all the great narrative painters he has the ability to depict the key events of history in the context of the life of his own time.

The painting looks down on a small village deep in snow, ruined castle and trees. The scene is overcrowded with people who are busy getting on with everyday tasks despite the bitter cold. A man carries logs to his cart, another fetches ale from a large barrel. Chickens scratch in the snow for any morsel of food they can find. A couple slaughter a pig, carefully collecting its blood. Children scamper and play in the snow and delight in skating on the ice. As with all Bruegel’s great landscape figure compositions there is so much detail to look at.

Bruegel’s composition leads the eye from the upper right down to the lower left where he has painted a large inn called “The Green Crown “. A large crowd are gathering outside its main door. They are not there for ale or food. The emperor’s officials sit at a large trestle table collecting taxes from them.

Arriving unnoticed amidst this throng of people was a man dressed in a long brown coat and large straw hat. We cannot see his face as he’s turning the other way. Behind him plods a donkey with a young woman on its back dressed in a long blue cloak. She looks exhausted and fed up. Bruegel depicts them as yet two more weary travellers at the end of a long journey.

This painting is called ‘The Numbering at Bethlehem.” It is in the collection of the Musées royaux des Beaux-Arts de Belgique, in Brussels. I never cease to be surprised at how Breugel transposes Bible stories from the Middle East of 2000 years ago to 16th Century Flanders. Bruegel cleverly alludes to the political unease in Flanders which was then ruled by Spain. Heavily armed soldiers are never far away in these winter snow scenes. I think that if Breugel were painting these Christmas stories in the 21st century Mary and Joseph might be wearing hoodies and tracksuits, carrying their belongings in plastic bags, having just got off a bus on their way to find a hostel for the night. 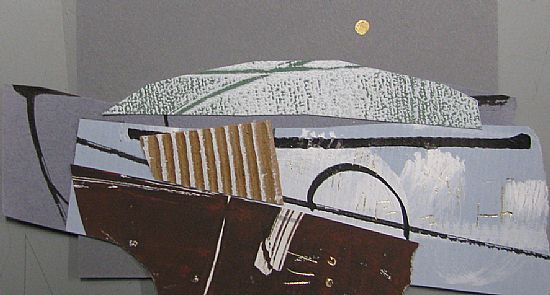 Shetland in Winter Two, Acrylic on Card, 2013 (c)Alan Watson b.1957 All Rights Reserved

See Wikipedia, for example, for some detail from the painting: http://en.wikipedia.org/wiki/The_Census_at_Bethlehem